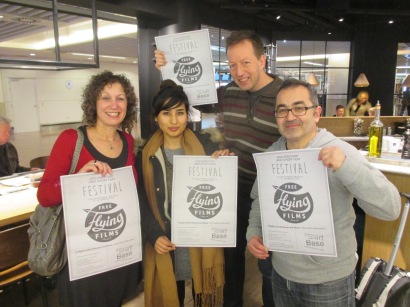 Free Flying Films is the name of a small group of cinema-crazy people, who organise film festivals all around the world. We screen films (short films, documentaries)  around the theme of Crossing Borders – inviting audiences to enjoy new cinema that gets you out of your box.

Because in these times of crisis and threats, the biggest mistake is to hide from the world, in your comfort zone, no longer interested in what the rest of the world is doing. If we lose our curiosity about the others, we stop caring about them. If we want to do something positive about this world, we have to cross borders, be it geographically or in our mind.

This is why Free Flying Films offers its programme around the world, at the lowest price possible, offering exposure and a platform for contributing film directors at a series of festivals around the world.

The international Free Flying Film team organises 6, 7 festivals per year, in liaison with local organisers (film clubs, hotels, cultural cafes, galleries etc).  In the last 2 years, festivals were held in Oslo, Athens, Samos, Jogjakarta (Indonesia), Moen (Denmark). 2017 will find us in Brussels, Leros and other places to be confirmed.

The FFF team consists of a small core team, led by organiser/programmer Ruard Wallis de Vries, and changing groups of local volunteers, depending on the place, structure and set-up. For instance, in Denmark and Greece we work with sponsored film clubs Biografen in Denmark), while in Brussels we work with an art gallery renwnend for its concerts as well (Art Base). The newest venture involves the excellent Leros Public Library, for a “Leros Short Film Fest”. Depending on the local situation, entry may be free. If there are entry tickets, the aim is to keep the price low.

We would be nowhere without contributing directors such as Tamara Erde, Filippos Koutsaftis, Annetta Papathassiou, Simon Korexenidis, Matte Mourik, Kyriakos Chatzimichailidis… Thank you for all you do, friends!

What makes Free Flying Films recognisable is that the festivals keep the same aim, the same logo, the same theme (Crossing Borders), the same approach (based on film directors presenting their work) the same programme (with possible additions of local film makers) and the same FFF-team working with the local organisers.

FFF screens short films, documentaries and (occasionally) full features. Usually, the programming is built around the available directors whose work, seen together, makes for a strong message: think out of the box, cross your own borders.

All films have English subtitles or are in English

One thought on “About”